The ‘Trichter’ – more than just a café

The ‘Trichter’ – more than just a café

From a washroom to a student café. Trichter has an eventful history, however not everyone has heard of this institution at the School of Business, Economics, and Society.

Some steps lead into the cellar of the FAU School of Business, Economics, and Society (WiSo) in Findelgasse in Nuremberg. The signs on the way down point us in the direction of the ‘Trichter’ student café. There is a mural depicting various scenes from Nuremberg’s history painted on the entire length and breadth of the vaulted ceiling. The rustic wooden furniture and the tile stove are original. 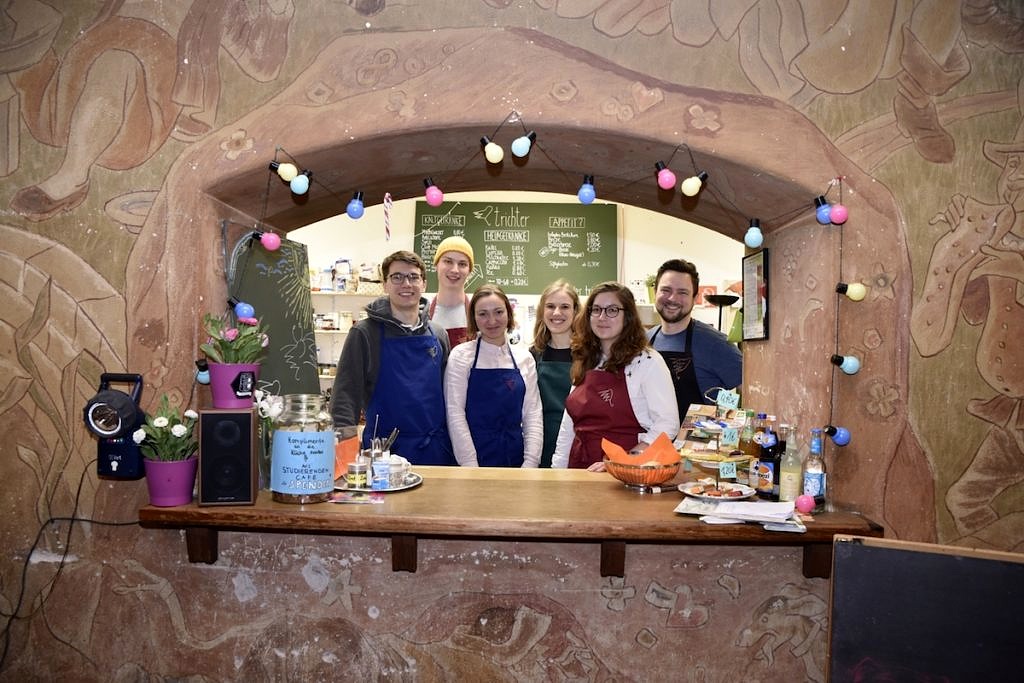 The Trichter team makes sure there’s plenty of good food and that everything is running smoothly. (Image: FAU/Luisa Macharowsky)

The café has been run by student volunteers since 1986. There are currently around 30 of them who are responsible for cooking, taking care of the café’s association, the finances, logistics, and of course, the customers. Once a year, they also organise the Trichter summer festival with live music played by student bands on the WiSo car park. ‘It can get stressful at times, particularly when we have to start planning the summer festival. But the great team spirit definitely makes up for it’, says Nina Gloger, who has been part of the Trichter team for a year and a half now.

Almost everyone at WiSo meets at Trichter. ‘We also get to know students from higher semesters who can give us some advice’, says Gloger. And research associates and professors also come here in their lunch breaks.

Trichter hasn’t always been a café though. At the beginning of the 20th century when many houses didn’t yet have a bathroom, it was used as a washroom for school children. Later, it was changed into a canteen by the National Socialist university management board. The murals on the ceiling and walls were painted during this time and in some parts reflect the antisemitic sentiments of the era. However, the artist Hans Krieg, who refused to join the National Socialist party in 1933 and thus lost his position in the state construction office, took rather a reserved stance with this work compared with several other works that were created during the Nazi period.

After this period, the Trichter stood empty for several years until students decided to bring it back to life. Just how much dedication this has required is clear to every customer. The Trichter logo is embroidered on the aprons of the students who work at the café and all the cups also feature a picture of a small funnel (or Trichter in German). ‘I like Trichter so much because it’s a student tradition that has been kept alive for so long. And because we have a lot of freedom to do what’s important to us’, explains Nina Gloger, almost wistfully. She has now finished her Bachelor’s degree in socioeconomics and has to leave Trichter for the time being to start an internship.

As several members of the team are either vegetarian or vegan, it’s important to them that there’s a range of meat-free dishes on the menu. The ingredients are also fair-trade, produced in the region and usually organic. For example, when pumpkin soup is on the menu. ‘For just €2.50 with pumpkin seeds and fresh bread from the bakery. It usually goes very quickly.’

What’s behind the name ‘Trichter’ (funnel in German)? The students themselves puzzled about the name for a long time, until they discovered a picture in the corner near the door that shows a young boy having something ‘funnelled’ into him, which is probably a joking allusion to the ‘Nuremberg funnel’, a metaphor for easy and mechanical learning.

100 years of the School of Business, Economics, and Society

The School of Business, Economics, and Society (WiSo) at FAU is celebrating its 100th anniversary this year with a series of exciting events such as an exhibition of the School’s history with artworks by artists from the region, a campus festival and the #NUEdialog congress about digitalisation and sustainability. More information is available at www.wiso100.fau.de.