Generating electricity: The price of carbon certificates must increase

Generating electricity: The price of carbon certificates must increase

Energy market researchers at FAU, the Vienna University of Economics and Business in Austria and the University of Applied Sciences of the Grisons, Switzerland, have been investigating which methods are most effective for reducing the carbon dioxide emissions created when generating electricity. They have come to the conclusion that increasing the price of carbon credits is currently considerably more effective than subsidising renewable energy from wind and solar power. The results of the study have now been published in the Journal of Environmental Economics and Management, one of the leading journals for environmental economics.

Germany aims to cut its greenhouse gas emissions by 55% by 2030, and by 2050, it hopes to be largely greenhouse gas neutral. To achieve these ambitious goals, the Federal Government is mainly using subsidies for regenerative energy sources, above all for wind and solar power. Germany uses the European Union Emissions Trading System (EU ETS) for pricing emissions, where the price for carbon certificates was significantly less than 10 euros per tonne of CO2 for several years. Even though Germany has increased the price of CO2 for heating oil and fuels to 25 euros per tonne at the beginning of the year, this does not apply to electricity generation.

Britain is following a different approach from Germany 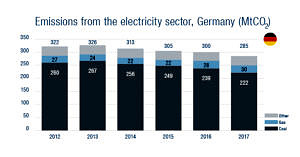 ‘Less than 10 euros per tonne of carbon dioxide is simply not enough to significantly reduce emissions,’ says economist Prof. Dr. Mario Liebensteiner, Professorship of Energy Markets and Energy Systems Analysis at the School of Business, Economics and Society at FAU. In collaboration with Prof. Dr. Klaus Gugler from the Vienna University of Economics and Business and Dr. Adhurim Haxhimusa from the University of Applied Sciences of the Grisons, Prof. Liebensteiner has investigated which control instruments are most effective for cutting greenhouse gas emissions during electricity production by using Germany and Great Britain as an example. ‘Both countries are pursuing different strategies,’ says Liebensteiner. ‘Whilst Germany is offering significant subsidies for renewable energy sources, Britain has introduced a CO2 tax for the electricity market. This means that the effective price of CO2 has been increased to over 35 euros per tonne.’

Which of these measures is most effective? For their comparison, the researchers evaluated data from both countries from the last few years: daily CO2 emissions from the electricity sector, CO2 prices, electricity fed into the grid from renewable energy sources and other variables such as the demand for electricity, the price of coal and gas, and seasonal effects. The results were clear. While Germany only achieved a moderate reduction in emissions in the electricity sector, Great Britain has cut its emissions by 55 percent after introducing the tax on electricity in 2013. 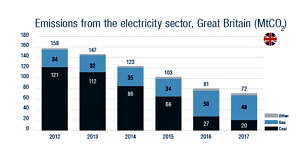 The researchers say that this difference is caused by two central aspects. On the one hand, subsidies for renewable energies are not achieving the desired effect. When prices for CO2 are low, wind and solar power initially replace only the relatively ‘clean’ gas power stations, while ‘dirty’ coal, and mainly very dirty brown coal, can retain their share of the market to a significant extent. Electricity produced using coal is only pushed out of the market when a very high amount of renewable energy is fed into the grid. On the other hand, as is the case in Great Britain, higher taxation of carbon dioxide emissions leads to coal increasingly being replaced by gas as an energy source. ‘Gas emits about half as much CO2 as coal when producing electricity,’ explains Mario Liebensteiner. ‘A moderately high price for CO2 makes coal unprofitable and we see a drop in emissions.’

A sample calculation: What can you achieve with a billion euros? 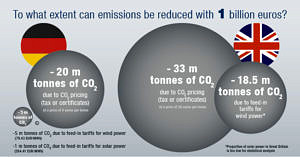 The model is very well suited for calculating the costs of approaches to climate policy. The economists calculated the extent to which governments can cut emissions with one billion euros. ‘In Germany, you can save around 20 million tonnes of CO2 due to the low carbon certificate price of eight euros per tonne,’ explains Liebensteiner. ‘If the money is invested in feed-in tariffs for wind or solar power, CO2 emissions can only be reduced by five million or one million tonnes respectively.’ The effect would be far greater in Britain. At a moderately high price of 36 euros per tonne, it would be possible to cut CO2 emissions by 33 million tonnes with one billion euros and around 18.5 million tonnes using current feed-in tariffs for wind power.

According to the researchers, the decisive advantage of the British strategy is that a CO2 price produces market-based incentives and does not dictate which technology is used. This allows relatively clean gas to push coal, which is considerably more problematic, off the market to a significant extent. In contrast, considerable subsidies for renewable energies combined with a low price for CO2 leads to gas being pushed off the market first, while coal power stations remain in operation. ‘Our results demonstrate that even a moderately high price for CO2 can help to reduce large amounts of CO2 quickly and cheaply if gas power stations are available to bridge the gap,’ says Liebensteiner. ‘We ought to bear in mind, however, that gas is also a fossil fuel and should be replaced by alternative sources in the long term, of course.’